Winter Reds, and Tomatoes, too... 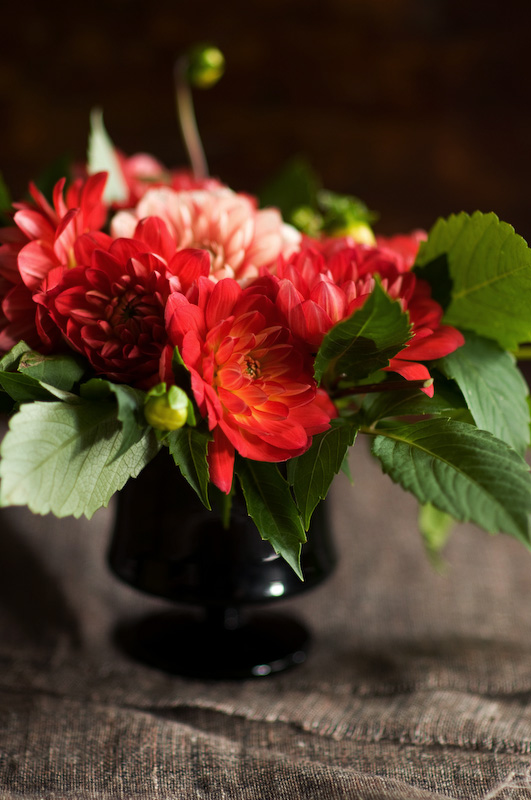 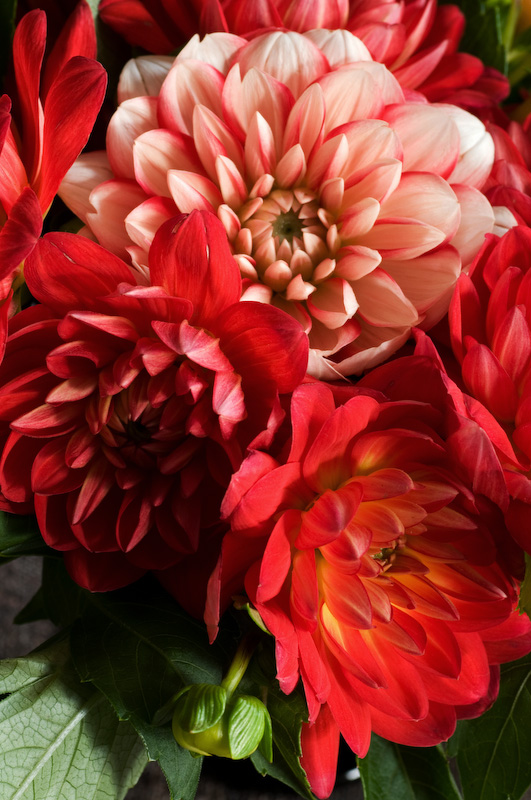 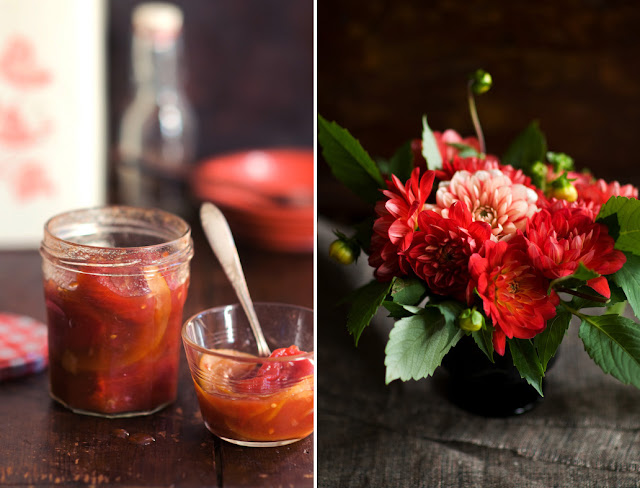 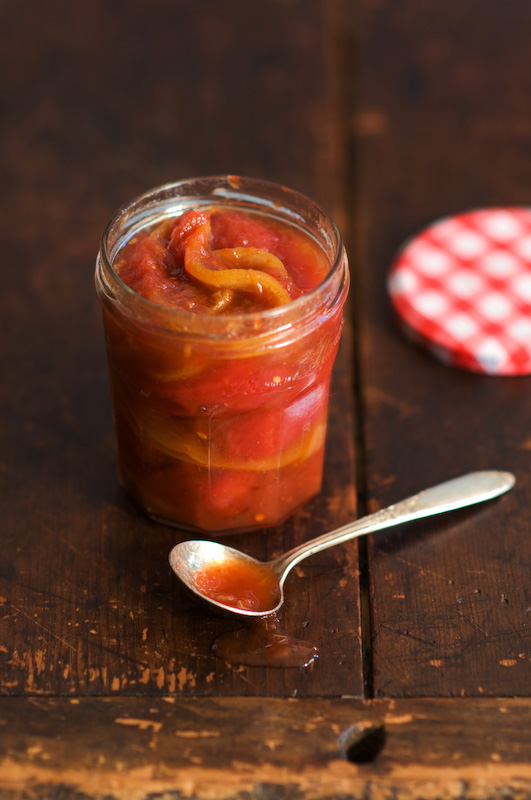 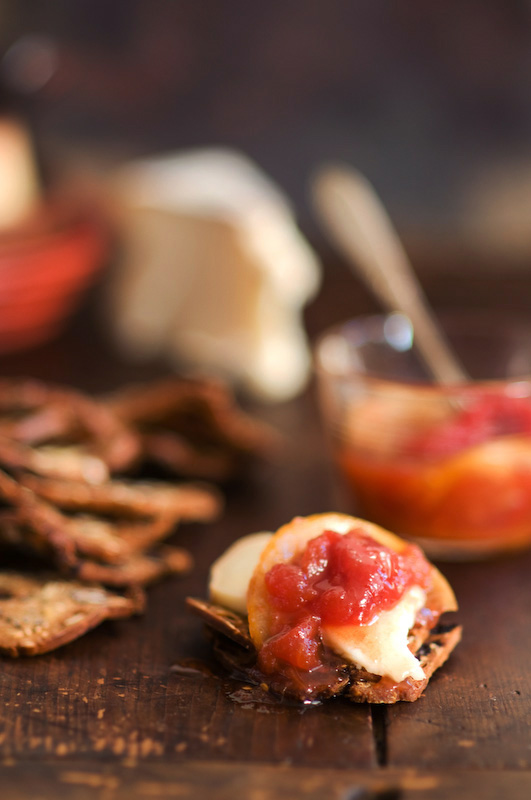 I have a gazillion recipes that I say to myself, "One day I'll make this". That, somehow I am going to just dedicate time to special (and strange) recipes from my grandmother and my mother - and other places in my history - and share them with you all. Usually, it's an idea tucked way far away in the back of my head. I comb through books and the internet and usually end up creating from what's right in front of me.

I can assert now, however, that things have moved more in the other direction as I write about this wonderful jam-syrup creation. My friend David calls this sandalwood jelly, from somewhere in his own history, and it hails from 1948, come my way by another dear friend, Bluejay. I love the idea of savory-sweet preserves, and so tucked this into my files for that down-the-road-someday time. When ripe tomatoes were abundant a few months ago I took to making the preserves. A bit labor-intensive, it was entirely worth it. I wish I'd made three times as much, in fact.

Tomato Preserves
Select the smallest plum tomatoes you can find, so you can leave them whole.

plum tomatoes - Make at least 3 pounds of tomatoes - gives you a good starting amount, and also makes the math simpler

Select slightly underripe tomatoes. Core and then peel off their skins by cutting a shallow X at the rounded end and dipping them in boiling water for 30 seconds. Slice tomatoes in half across the middle if they are large, and remove their seeds. Layer tomatoes and sugar in a deep, enameled pot (or other heavy saucepan). Cover, and let stand overnight (do not refrigerate).

The next day, put the spices in cheesecloth and secure with string. Add the spice bag to to tomatoes, along with the sliced lemon. Over medium heat, bring pot to a simmer. Cook, stirring often, until the tomatoes have become slightly translucent and the syrup is think and begins to gel. This will take a while and is the most labor-intensive part. Do not boil the syrup, or the tomatoes will fall apart. If the tomatoes finish first, remove them from the pot and reduce the syrup over medium-high heat. Discard the spice bag. Meanwhile, sterilize enough jars to accommodate the preserves. Fill the jars 3/4 full with tomatoes and lemons, cover with syrup, and seal using your preferred method.

Eat the preserves with a creamy or bold, nutty cheese on bread crisps or crackers. I promise you it won't last long... 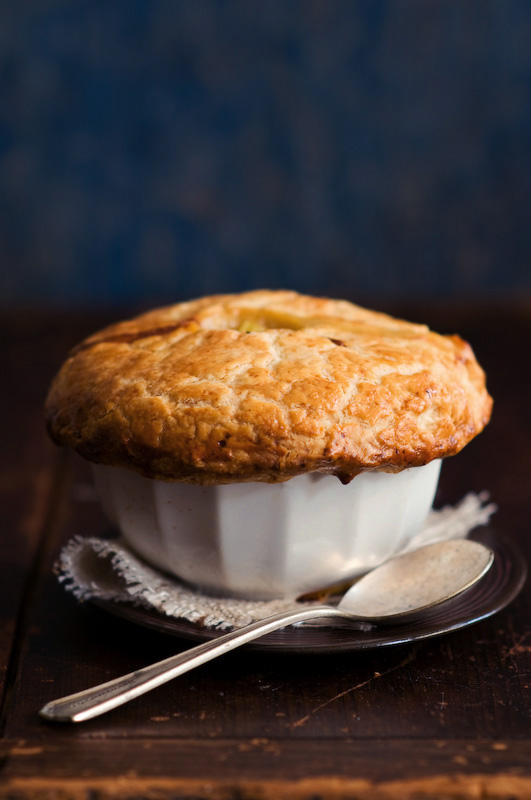 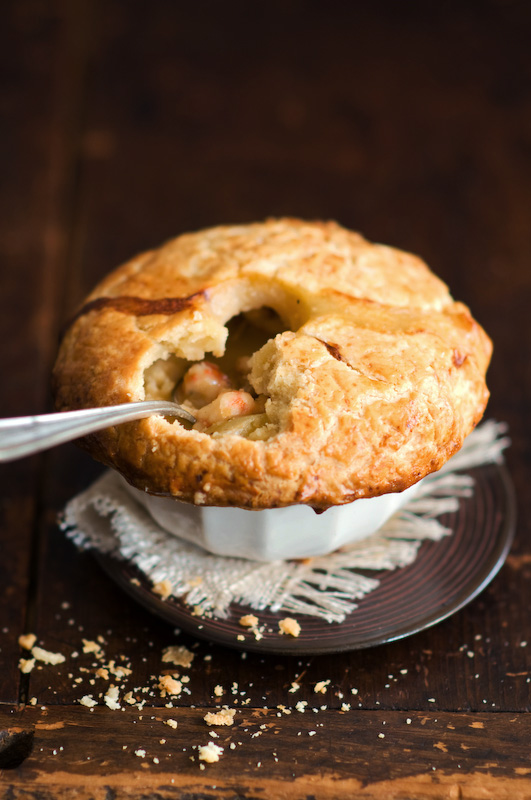 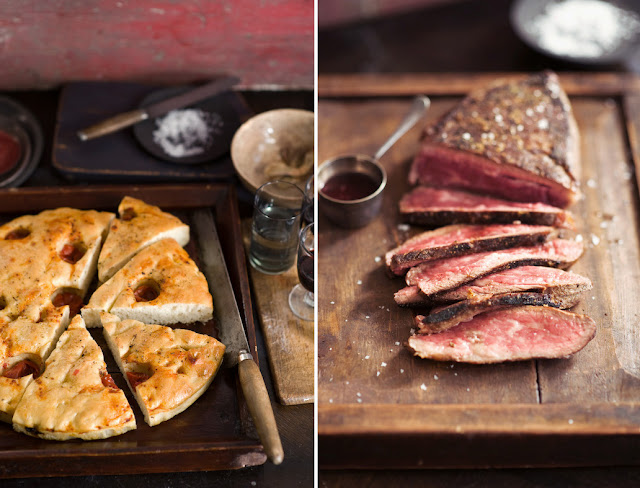 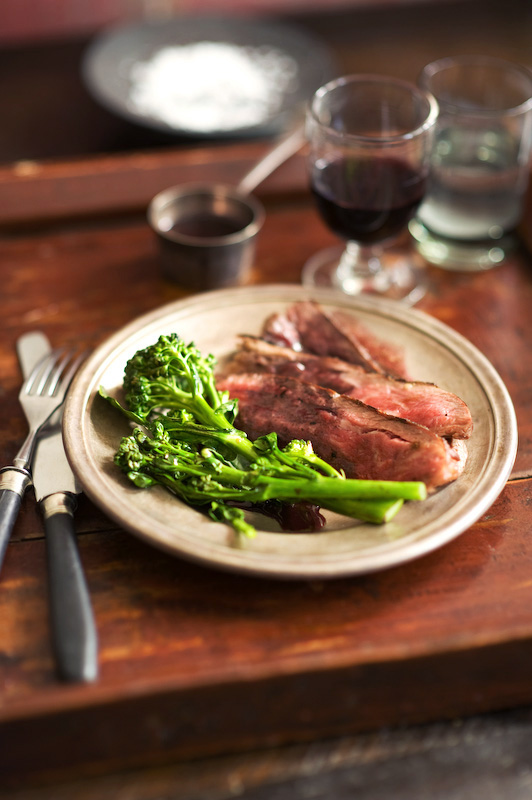 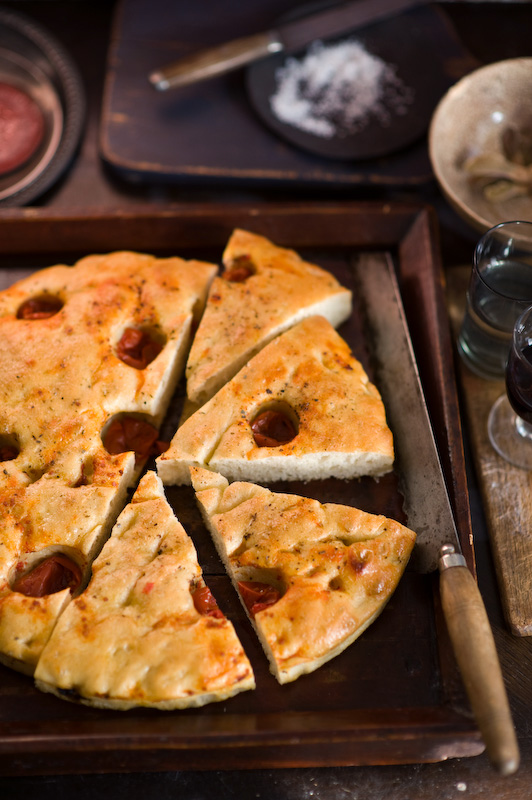 Pulse dry ingredients for the shortcrust in a food processor a couple times to combine. Add butter and pulse until mixture looks like a coarse meal. All can be done by hand, using a whisk to combine, and 2 butter knives to cut the butter into the flour mixture. Slowly pour in 1/4 cup ice water and pulse just until mixture begins to hold together. Add more water if dough is too dry, a spoonful at a time, and pulse again. Divide dough into four mounds, gather into balls, and place (each) wrapped loosely in saran. With your palm, lightly flatten into disks. Refrigerate until firm, about an hour (or overnight).

Remove from saran and roll each disk of dough out to just under a 1/4-inch thick on a lightly floured surface. Cut out a circle from each using the ramekin sizes as a guide, allowing for some overhang. Using a small cookie cutter or tiny glass (a shot glass is perfect here), press into center of circles and remove cut-out, for steam to release. Mound scraps together and save for a separate use (keeps frozen for a few months). Refrigerate again to firm, while filling is cooked and then spooned into dishes.

Melt butter in a deep cast iron skillet over medium heat. Sauté leeks until softened, stirring occasionally, about 5 minutes or so. Add the sausage and brown on all sides, about 3 minutes. Add garlic and sear until fragrant, a minute or two. Stir flour in to combine, and then the vermouth, incorporating liquid to leek-sausage mixture. Add stock and potatoes and cook until potatoes are just tender, about 5 minutes. Add the shrimp, stir to incorporate with the rest, and set aside.


Preheat oven to 400 degrees (F). Divide the filling into 4 four-inch ramekins, and top with the cold shortcrust dough, pressing slightly the along edge to adhere. Brush egg wash over tops, and bake until pastry is golden and filling bubbles, about 18 minutes. Remove from oven and allow to cool on wire rack for 10 minutes before serving.
These were delightful both as an easy supper, as well as a savory breakfast pie the next day... :-)

Tri-tip steak is relatively uncommon, and is far less expensive than similar cuts of meat. Only two per cow, it is the tip of the sirloin. This cut is superbly flavorful due to its nicely marbled flesh, and makes an excellent candidate for grilling, broiling, and roasting. Are you drooling yet...?

Bring steak to room temp, rinse it and blot it dry. Dry-age it on a wire rack (use one from a toaster oven, or for cooling cakes, etc.) and set over a plate overnight in the refrigerator, or on the counter for an hour. Rub meat all over with the cut side of the garlic. Heat a dry cast iron skillet over high heat, and scatter sea salt over its surface. When the salt begins to pop, press the steak into the pan, and sear it on both sides until brown, about 9 minutes total, for medium-rare. You may want to turn a fan on or open a window, as this process will make the kitchen smoky.

Transfer steak to a cutting surface, top with freshly ground pepper, and let meat rest for 10 minutes or so. Pour the wine into the skillet and scrape any bits stuck to the bottom of the pan. Reduce the liquid by half over medium-high heat. Remove from the flame and add the butter, swirling it in the pan to incorporate. Serve the steak in slices, pouring the sauce liberally over, and accompany with fresh, crisp veggies.

I used pira cicaba, seared just briefly in the empty pan. It is an heirloom green similar to broccoli which I discovered at the market one day. Delicately floral and with a sturdy crunch, it made a nice counterpoint to the rich, juicy flavor of the steak.

I must confess I did not make the delightful black pepper-tomato focaccia. I only harvested the airy, oil-rich flatbread from its shelf so that I could nibble away at it immediately. I discovered this bread on a rainy Sunday morning, on one of my habitual trips to a neighborhood farmers' market called the Foodshed. My bags overflowing with organic and local produce, eggs, bread, honey, and other delicious things, it is a uniquely great experience that nourishes on every front. So, you can't fault me, right? You'll agree that it looks good enough to steal away with, and maybe challenge me to actually make focaccia soon. Keep your eyes peeled.... :)

And that brings me to the last recipe in this soothing story... 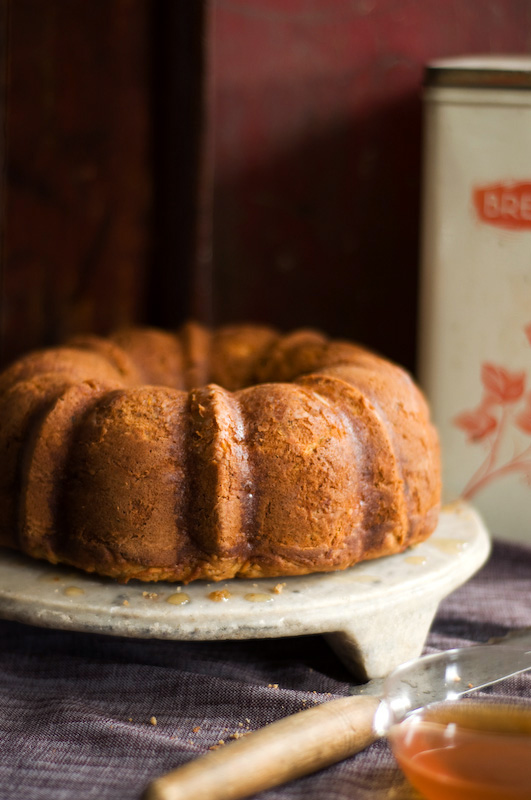 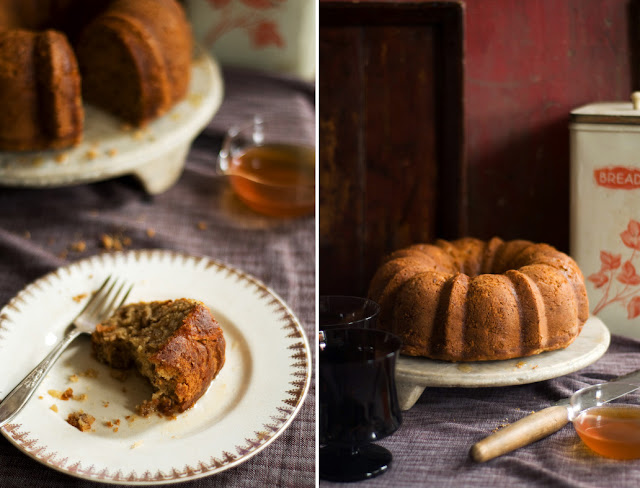 This multi-staged cake is well worth it: moist, subtly nutty, and fragrant with liquor. The only difficulty is its numerous components, so dive in!

Grease and flour a 12-cup bundt pan and set aside. In a small bowl, combine bourbon and chopped ginger, and let stand 10 minutes. In a large bowl, beat together brown sugar and butter on medium-high speed until light and fluffy with stand mixer, fitted with the paddle attachment. - Or, using a hand-held mixer... I hadn't seen this detail in the recipe, and had made my mind up that I absolutely was going to make this delicious-sounding cake, and so forged ahead using my vintage hand-me-down hand mixer. It worked just fine... Determination goes a long way. - With my hand-held mixer, it took about 7 minutes. Beat in the eggs one at a time, fully incorporating each before adding the next.

In a separate bowl, whisk together flour with baking soda, baking powder, cinnamon, salt, and nutmeg. In another bowl, fold vanilla into sour cream until combined. Pour in the bourbon from the ginger mixture (save ginger), whisk until smooth, and stir in zest.

Turn oven to 325 degrees (F). With mixer on medium speed, add dry ingredient mix and sour cream blend to the sugar-butter-egg solution in three additions, alternating adding one and then the other. Fold in the ginger, apples, and pecans. Pour the batter into the bundt pan and bake until golden brown, where a skewer inserted into the batter comes out dry, about an hour.

Cool in the pan for 15 minutes and run a butter knife around the sides of the pan to release the cake. Cool on a wire rack, bottom-side-down. While cake cools, make 10 slits on top with a paring knife, and heat the 1/2 cup sugar and bourbon together in a small saucepan over low heat. Gently stir until sugar dissolves, remove from heat, and add lemon juice. Pour half the sauce onto the still warm cake. When it has fully cooled, flip the cake and pour over half the remaining glaze. Turn upright, serve, and accompany with the last of the sauce. 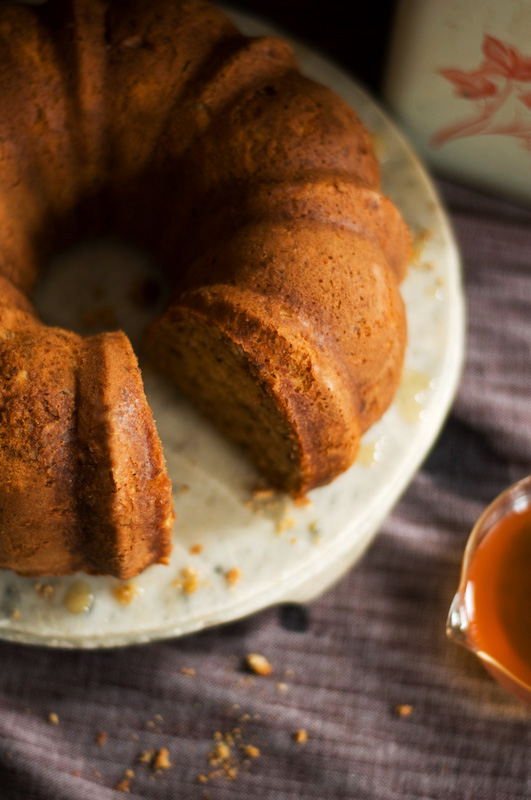 I hope you have thoroughly enjoyed this warming and wintry adventure. So many things to keep us cozy on chilly nights! Here's to a little frost on our windows to inspire us all. :)
Posted by Melina at 11:12 AM 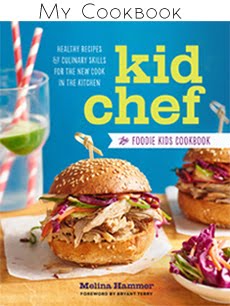